I was in our western porch looking at the sunset and some very intense and exceptionally wonderful cloud formations the other day.  While watching these formations shift and grow and play, I felt a powerful presence.  I knew that, once again, there were more than just ‘clouds’ up there.

So I talked to them in my mind.  I told them that I wanted to see them, not just in cloud form this time, but totally ‘de-cloaked’, as they’ve been appearing to many thousands of people in increasing frequency throughout the world.  I told them that I wouldn’t ‘freak out’, that it was high time they showed themselves to me, etc.

Within a minute or two a small cloud separated itself from the mass and started drifting towards me.  It came directly at me at a steady speed.  It ended up directly over my neighbor’s property, where it finally stopped, ‘posed’ for a minute, then dissipated slowly back into the atmosphere.

The first photo (above) is what I was originally watching (believe me, the photo does NOT do the beauty justice!).  The second one (below) is what they ‘sent’ to my home.  That’s my roof in the upper part of the photo – yeah, it came that close to me!  And notice the SHAPE!  How many heart-shaped clouds have come calling at your home immediately after you’ve sent a telepathic message to a bunch of ‘inanimate’ atmospheric vapors? 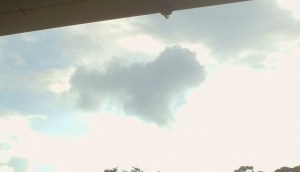 FRESH UPDATE:  A huge flashing multicolored lightship showed up a couple of nights after this event, too, over the southwest ridge.  It was amazingly brilliant.  I only looked at it for like 20 seconds, though, because I had seen other ‘things’ like that many times in that general direction (though a bit more south), and attributed those phenomena mostly to bright stars that were just fairly low on the horizon (where the ‘sunset effect’ can make their normal pure white color break up into other colors – but not change rapidly and constantly between various colors, by the way).  This one, though, was at least 3 times as bright and flashy, and displayed various colors of the rainbow simultaneously, all of which were sparkling and flashing dazzlingly, and with a laser-like intensity.  Unfortunately, I didn’t pay that much attention to this one.  I wasn’t in the greatest of moods at the time.  Regardless, when I went out back again around half an hour later, it was gone, completely and utterly, and never came back.  Definitely NOT a star then, as stars move only a few degrees per hour in the sky.  Next time I’ll pay a bit more attention. . . . .

Things are picking up!